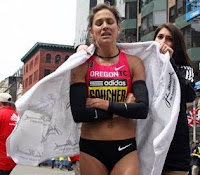 Races should be learning tools on the road to getting faster, going farther, running more or whatever your running goals may be. One should analyze what worked and what didn’t and make changes based on the analysis. So here is mine on Freedom’s Run. Maybe my mistakes will help you not to make the same ones or maybe what I did right will work for you also. If I leave anything off the list – feel free to add more – Seeing what works and doesn’t work for others ALWAYS helps me!!

What I did right:
1. I carried my own water and drank two full bottles during the race

2. I ate more during this marathon than in any of my previous ten

3. I ate earlier – I started refueling at about mile 5 – this is important because in most marathons I start refueling once I have already used up my glycogen stores leaving a period where I am running on empty waiting for my body to digest the energy from the chews

4. I did not go out too fast. This one is VERY important. In the early stages of the race I was concerned that some of the girls around me were going to pull me to run too fast. So I was that annoying woman and asked them what their goal times were – one hoped to break 4:30 another 4 hours. They were going out wayyyy too fast for their goal times and were at risk for hitting “the wall” Click Here for a great article on the science behind this mistake.

5. I ate really healthy the weeks leading up to the race. Well other than the one night that I gorged on pizza and finished a medium pie with my two kids who are now 3 and 1. I think Mommy ate most of it – whooops

6. I cut back on caffeine in the weeks leading up to the race. This helped give me an extra little jolt from the sugar free red bull I drank 30 minutes prior to the race.

7. I tore the front of my throw away shirt. This enabled me to rip it off rather than try to pull it over my head and throw it to the side.

8. I made my own arm warmers out of tube socks. This enabled me to throw them away with out an ounce of remorse for the $30+ I would have spent on real ones.

9. I bodyglidded everywhere. I put in every where that my sports bra had a seem, on my thighs, my arm pits and around the waist band of my shorts. Consequently I have NO chaffing for the first time ever after a marathon.

10. I read and re-read all the fabulous motivational text messages from my friends. When I was really bored and suffering in the battle fields these were easy to remember motivators.(I’ll post some of them later because maybe the graceful words of my friends can help you in your marathon or race)

11. I finished. I don’t like the three letter word DNF(Did Not Finish). In my book there is no reason to not finish what you started. Even if I had to walk the whole course one can not succumb to the voice in your head telling you to stop.

What I did wrong:
1. I forgot to put on sunscreen. Even on not so sunny days this is very important. The average marathoner is out running for 4 + hours. Four plus hours in the sun can leave your skin very burnt. The flushed red feeling you get after a sunburn is blood rushing to the surface of your skin to attempt to repair it. During a marathon you need your blood to be doing more important things that repairing a sun burn.

2. I talked too much. I NEVER talk during marathons – it’s a race afterall and one should not be able to talk during a race. I thought to myself if I can talk and talk easily then I am not going to fast – I’m running a conversational pace. I was however waisting precious energy and oxygen on the simple act of talking. I was probably annoying people too.

3. I picked a hard course. Unless you enjoy enduring extra pain for no reason there is no reason to add on to the pain of a marathon – it’s painful enough as it is. Do you see elite men and women running super hard courses? I’m not saying these races don’t serve a purpose – they do. Heck if you want to place go to a small course 🙂 I never would have thought in a million years that I would be 3rd overall female in a marathon. Only people like Kara Goucher finish 3rd – not little old me!

4. I gave up. At no point in a marathon is it OK to give up. My husband gave me a swift kick in the pants when he saw me. In reality I should have given this to myself before I started walking at 23. In reality slowing down to the slowest possible running speed you can is faster than walking. The only reason I pr’ed last year at Marine Corps is because I did not walk, not one single step. That gave me precious minutes off my time. My goal had been 3:30 at Freedom’s Run – if I had not walked I probably would have achieved that.

Hope these tid bits help you in your next race!

** Photo by Nancy Lane – Taken from the Boston Herald