My alarm went off Sunday morning and I honestly had no idea why it was blaring in my ear. I thought it was the weekend? It’s Sunday, not a long run day. It literally took a couple of minutes before my mind remembered – oh shoot – it’s racing day!

I hopped out of bed and brushed my teeth. I couldn’t decide on my race outfit – I knew I needed to wear less than I wanted too but I was feeling blah and I knew it would windy on Haines Point. I didn’t want to show up with my belly hanging out to this race.

The Veterans Day 10K attracts some of the fastest men and women in the DC area because of the monetary prizes ten deep per gender and five year age group prizes. The chance of me ever finishing in the top women is very slim.

In 2009 I ran this race with my friend Meredith, I ran a huge PR and faster than I had ever run before for any race distance with a time of 41:17. I later learned that I came in 3rd in my age group – which was very exciting and unexpected. Guess all the super fast girls stayed home that day.

I also learned after the race that in order to qualify to be ranked in the Run Washington runner rankings you have to run a 41:15 10K time twice or the equivalent in races of another distance. I was 2 seconds off from my first race ever that could get me into the rankings.

I thought the race was a fluke and I had only run that fast because I was desperately trying to keep up with Meredith. Turns out – it wasn’t a fluke. A couple of weeks later on a hilly course in Reston I ran another 41 something 10K. I started to wonder in my head. Am I fast? Can I one day show up to the start line of a race and feel like I belong there with my toe on the line?

I have only raced one other 10K since those two 41’s. It was shortly after Colton was born. I wanted my body to be as fast as it was before I had gotten pregnant but it wasn’t. It was hard for me to accept that. On a windy day I went out at a pace that was too fast. I haven’t raced a 10K since then. I don’t know if i was scared of the pain or if I was just so focused on the marathon, but the 10K wasn’t something I wanted to do.

If you ask me what distance I like – I will tell you a marathon. Why? I think I’m good at them. If you ask me if I like shorter distances I will most likely say sort of. I love racing. I love racing all distances. I just don’t enjoy the pain of the shorter races. That burning feeling in your lungs. I like the marathon type of pain. Slow and long. I don’t like short SUPER painful races – well until they are over and I forget the pain. Then I am back in love.

I decided on a race outfit. It was the Veterans Day 10K and so I wanted to be patriotic. I put a flag tattoo on my face and pulled up my red sparkle skirt over my Saucony capri’s. I was good to go.

The car ride into DC was uneventful. I felt a little lonely. I wanted Meredith to be with me. I was scared to run super fast alone. [being fast is a state of mind – I was fast when I ran 9 minute miles – it’s all relative – my speed now is fast for me]

I found an awesome parking spot, which made me smile. It’s about the little things in life.

I walked past the Lincoln Memorial and smiled again. Eric proposed there. I feel like it is my memorial, that someway I am connected to Lincoln. Yes this sounds bizarre but it’s the way I feel. Miles’s middle name is Lincoln. I love the steps. I love standing there and looking out on the National Mall and feeling small. I love it that I am just a speck of life in this universe. When I am gone I most likely won’t be remembered for very long. That’s okay. I’m humbled by the fact that God loves me, a little speck. He cares about me, someone who isn’t famous and most likely won’t be remembered. I won’t have a memorial like Lincoln but it doesn’t mean that I am any less important to Him.

When I got to the race start I bumped into two other runners I knew – we warmed up together. It was nice to have something to take my mind off the pain that was about to come.

I saw Coach George of Capital Area Runners. He asked how I felt at Marine Corps. I told him it was idiotic to run 2 marathons 2 weeks apart, but that I had fun. He said he was glad I was finally learning. I told him that I was planning on running an ultra today. He laughed and told me I need to take care of my body, ultras can be in the future, just not now.

What the mind believes the body can achieve! 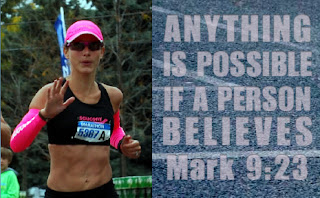 At the start line I got a couple of looks. I felt like I didn’t belong for a second, that I should move back. I had to get myself out of that high school mentality. No I wasn’t the fastest girl here, but I did deserve to be up towards the front. In that moment I knew I would PR. I knew that I would prove I did belong.

And we were off….

I reminded myself I could blow the race in the first mile and to go out at a comfortable pace. Pacing is my biggest struggle. What felt like an under control first mile, wasn’t.

YIKES. It didn’t feel too fast but I knew it was. I would feel it in the next miles. I kept the effort the same but knew the pace would be slower because of that darn first mile.

I pushed on. I caught up to a super fit girl. She looked like a barbie, long skinny legs. I was glad I was wearing my skirt – it was hiding the extra weight I had gained since Columbus Marathon. I started to have a little self doubt, but then I remembered what my mom told me last time I complained about the size of my thighs.

These thighs, while bigger than most girls my size, get me to the finish line of marathons. They get me there fast. Would I exchange my marathon PR for skinny legs? No. I need to learn to love my legs.

I passed the girl. She seemed frustrated that I was passing her. Maybe it was the skirt? Maybe it was because at the start line she didn’t think I could run in the 6’s. Who knows. Maybe I’m judging her.

She caught back up. I wanted to race her but I wanted to run my own race. Don’t get caught up racing her Dorothy. You are racing for time, not place.

I threw out a surge. I know I just said I was racing myself and not her, but I felt judged and wanted to beat her. I got competitive.

She then remarked to a guy next to us – ughhhh it’s not in my legs today. It stung. Seriously stung. I have no idea if she was saying it to make herself feel better or to try to let me know that she was faster than me[which she probably was], either way it stung. I wanted to say oh yeah that sucks – I feel you. I just ran a marathon 2 weeks ago and another one 2 weeks before that and yeah my kids – cause I have three of them – have really been running me into the ground lately. I know it’s so silly I felt like that….it’s actually even embarrassing to admit, but it’s like her saying that took away from the speed I was running.

At this point I wanted the race to be over. I was in serious pain. This is why I don’t love short stuff – I thought to myself.

I then gave myself a pep talk. Dorothy YOU ARE FAST. If you don’t believe in yourself how can anyone else? PR girl – you deserve this – you have earned this.

I silently chanted over and over to myself – I can do all things who Christ who strengthens me.

I caught up to a woman who I admire. She is a rock star runner and I have seen her win races. I told myself to stay slightly behind her till the finish line. I would pass her at the end with my final kick – hopefully not giving her enough time to pass me back.

I passed – she said something nice to me. I passed a man. I ran harder than I have ever run in a race. Literally I felt like I was suffocating, but I saw 40 on the clock and I needed to get to that finish line before it turned 41.

I finished – caught my breath and was jumping out of my skin excited.

I heard the woman I passed say she had gone out too fast in the first mile and that she was recovering from being sick. There is no doubt in my mind that she is a faster runner, that on most days she would KILL me in a 10K, but today I beat her. It felt good.