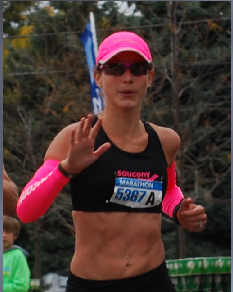 What follows are my thoughts on pace groups. You may or may not agree with what I have to say. That’s fine. When discussing this topic with my husband after Columbus Marathon, he remarked, some people like to turn off their brains and just run. For those people who just want someone else to do the work of pacing and such, then a pace group may work for you. I can only tell you why I DON’T run with one and never will.(I also don’t wear pace bands but that’s another topic all together)

In order to be a pace group leader runners typically have to show proof of running a recent marathon much faster than the projected time they are pacing. For instance with my 3:13 I could pace a 3:40 pace group.

On any given day a 3:40 marathon MIGHT be easy for me. If you are running with the 3:40 pace group it likely means that 3:40 is the BEST you have on that day. It is a target goal time for most of you. If I am running a 3:40 and start out at a pace that is too fast, I can slow it down and not feel the affects as much as the runner who needed to start out at a slower pace and then work into the faster pace. It also means that if I am running too slow I can pick up the pace. Say I am off  by a couple of minutes. Instead of running a targeted 8:32 I may just run a 7:59 to get us back on track. Pacers are supposed to evenly pace a race, but they are humans. Most of them ordinary runners, who sign up for the job. This isn’t their full time job – they are not experts at pacing marathons, they are not rabbits for elite runners.

I said 3:40 MIGHT be easy for me. The beauty and heartbreak in marathons is that you can prepare for months but not know the outcome on that day. How many of you have targetted a sub 4:00 marathon only to run a 4:20 something? What if I am your pacer and I am having a terrible day? My stomach is hurting and I have to take a potty break? What happens if 3:40 suddenly seems like the best I could do that day and I wonder if I can even do that?

NOTHING NEW ON RACE DAY.

I don’t think you should ever do anything new on race day. No new foods. No new gels. No new shoes. No new clothes (hint hint – don’t wear your race shirt). No new socks. NOTHING NEW. If you haven’t trained with it then don’t wear it, use it, or eat it.

One of the reasons I am drawn to smaller marathons is because there are less people. Do not get me wrong I LOVE big marathons. I love the amenities that smaller races do not offer, but I don’t like the people. Race courses are crowded enough as it is – now try running in a tight group for 26.2 miles. Something about the stinky guy who breathes too loud might not bother you in mile 6 but by mile 20 you think to yourself if you had a baseball bat you might just go Tonya Harding on his legs. I don’t know about you but I don’t want to feel like I have to run with the same people for 26.2 miles. I want to enjoy the race and the scenery – not be clumped into a large group of runners I don’t know.

Do you run with a pacer on your long runs? Do you know the pacer? Is he or she someone you can trust? You trained for months, maybe even years for this day and you are now willing to put your faith in someone you have just met moments before?

Those of you that you have successfully run with a pace group and had a great time will argue it works. To that arguement I will counter with the fact that if you had gone out at a slower pace and worked into a faster pace, instead of running even splits, you could have run an even faster marathon time. Even splits are not only extremely hard to do but they do not show your true fitness level.

Runners worry will I be able to make up the time? You always die at the end of a marathon. NOT TRUE. You don’t have to run out of steam.

I’ve run marathons thinking I could put time in the bank – it doesn’t work.

I’ve run marathon trying to even pace the whole race – it rarely works.

I’ve run marathons where I started out too fast and hit the wall hard despite being in great shape.

I’ve run 3 marathons where I started out at the appropriate slower pace, worked into a faster pace, and didn’t hit the wall. They are my three fastest marathons – 3:13, 3:21, 3:23.

Before I end this post I will say one last thing. Do what works for you. If you are scared to run alone and want the comfort of other people you know are targetting the same race time. Then by all means – run with them.

If you haven’t read my race recap of Columbus Marathon you can do so HERE.

If you want to read about how not to hit the wall in a marathon you can do so HERE.