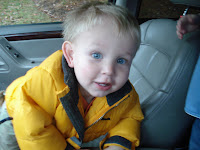 Normally a rainy week would prevent me from being able to run. Not from lack of wanting to – but from lack of the kids wanting to get soaked – silly babies! Miss B however was a dear friend and offered to watch the kids Thursday and Friday so I could get in an easy run and my last 10 miler before Marine Corps. Thank goodness for friends!

Today I went back to my old stomping ground to cheer on runners(my husband included) at the Susco 8K.

The Susco 8K is a race that is run in memory of Tim Susco, a former high school classmate of mine. I’m not going to say that I was best friends with Tim or even that I was close friends with him – but I do remember him as being a familiar face in the hallway who always said hi to me (something that actually meant something being that I used to be extremely shy). Tim died suddenly and tragically of a brain aneurysm.

Why am I telling you all this? Well because I want to admit that I never really understood charity races or why people felt compelled to participate in them. Even the breast cancer ones I only sort of understood. My own grandmother is a breast cancer survivor but I have never felt compelled to run one. I thought they were nice but never really ‘got’ it…..until yesterday.

One of the great things about being on the Saucony Hurricane Team is that we get to help sponsor races and can often provide random prizes. This time Saucony had donated some string bags, stickers and water bottles. I went to drop these off at Tim’s parents house and briefly met his brother Tom. It was in the two minutes I spent outside in the rain talking to him that I “got” it. Tim was his brother, he was someones son, he was lots of people’s friends and he is missed. Missed so much so that his family and friends take the time to put on a race each year in his remembrance. A race that raises money to help learn more about brain aneurysm’s.

And so this morning even though I wanted to sleep in and rest – I didn’t. Chloe, Miles and I parked by the road in the first mile and cheered Eric on. We then moved our car to cheer people on in the last mile. In the time I was waiting for the runners to start to come our way, I thought about Tim. I thought about his brother. I thought about how much it would hurt if I lost someone I love. I thought about what a great thing memorial races can be, what a great thing charity races are. Not everyone is a runner yet lots of these non-runners run races each year. They run these races because it’s an active way for them to express how they feel – they are becoming the difference they want to see in the world. Running is an outward expression of their love, of their feelings.

I got chocked up as my kids hung their heads out the window in the rain and yelled for EVERY runner that went by. It made me so proud – Chloe’s little voice belting out – good job – run run.

After the race I ran into two girls I went to high school with – they both were good friends of Tim’s. I didn’t even know what to say. I tried to make small talk even though I was horrible at it. What I wanted to say to them was that I got it – I really got it – I got it that they got out of bed today and walked to remember Tim, to feel close to him – I finally understood. I wanted to say I’m sorry for your loss.

When we met up with my husband after the race – he said the race was a little pricey for an 8k – I said – yeah but it’s going to a good cause, a great cause. And he said GOOD POINT 🙂