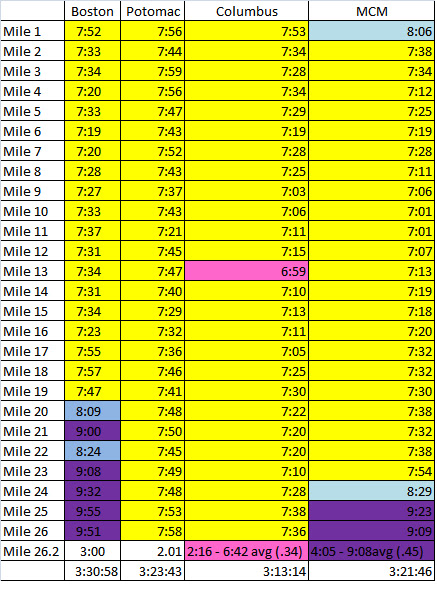 I think it is important after every marathon to take a look at your splits and see where there is room for improvement.
This chart is the side by side split comparison for all 26.2 miles of the last four marathons I have run.
At Boston Marathon 2011 I started out at what I would consider the perfect pace for my goal of breaking 3:21. It was 5 months postpartum. I was still nursing my son, which combined with traveling and not drinking enough resulted in dehydrated. The slow down at the end was a result of dehydration and not a bad pacing strategy. [I ended up in the medic tent if you want to read the Race Recap]
At Potomac River Run Marathon 2011 I had no goal time in mind. I was running for the pure joy of it and planned on being happy with whatever my legs would give me. It was 2 weeks after Boston so even though I think I paced this marathon perfectly I could not pick it up at the end as a result of dead legs. It was my 2nd fastest marathon at the time and I was over the moon with the result. It was also the first time I had done 3 marathons back to back [5 weeks].
At Columbus Marathon 2011 I again went out at a slow conservative pace with the overall goal of running 3:10 with an average of 7:16 per mile. At the time I thought I had eaten breakfast too late because I was burping peanut butter in the first miles, but after feeling famished at the start of Marine Corps, I think I may have eaten at the perfect time. I will be eating around 2 1/2 hours before my next marathon.
In hindsight the 6:59 mile at mile 13 freaked me out a little bit. Instead of doubting whether I could have held that pace during a marathon I should have told myself that it was fine and kept running at that speed. I’m over the moon about the result, but still think I can learn from the race.
Marine Corps Marathon 2011 was 2 weeks after Columbus so I knew I was entering the race on dead legs. I had no idea what my body would give me that day but still wanted to attempt a 3:10 even though I knew it would be HARD. I started out at a 8:06 pace planning to average 7:16. I think my pacing strategy was great the only problem was my dead legs. It was mentally hard in the last miles when I started to feel fatigued to push through knowing I had already ran a 3:13. Subconsciously I think I gave my body a way out by thinking of my last race. I wish I had not thought about the 3:13 at all or voiced that I was dying. My body believed what my mouth said and slowed in the last 3 miles. I’m pleased with the result. It confirms to me that I pushed hard at Columbus because I did not have much left in the tank at Marine Corps.
Do you analyze your splits? If so why? If not why not?