My alarm went off at 4:11. My favorite number is 11 and my birthday is 4/11. If I was waking up early for a marathon I wanted the number on the clock to be a good one.

I was not tired.

In the weeks leading up to Marine Corps I tried to go to sleep every single night between 8pm and 9pm. I would put my kids to sleep and then go to bed. I set my alarm for 5 am and though I mostly laid in bed till 5:45 my mind was awake getting used to an early start.

I got dressed, ate, and headed out the door. It was cold. In a moment of panick I ran back inside and altered my race outfit. Bad form Dorothy bad form.

I waited for some friends and friends of friends to arrive to begin our caravan down to Arlington.

Our first stop was to pick up Lauren and her lovely boyfriend. Lauren [if you don’t already know who she is] was a teammate of mine at Hood To Coast with nuun and the blogger behind Health On the Run [one of my favorite running blogs].

I was a tad stressed, not because I was running my second marathon in 2 weeks but because people were relying on me to get them to the race start. I consider myself a semi pro at Marine Corps having run the marathon 6 times and the 10K twice, but in the one year I missed [last year because I was too pregnant and hubby didn’t like the idea of me running a 10K at 37 weeks pregnant – he had valid reasons that I agreed with] they had moved the start line further back. I checked out the map and knew what MCM was doing…..

The start line was not near as far back as they made it to seem on the maps, their advice to park in Crystal City and take shuttles only made sense if you needed to check a bag and weren’t from this area. 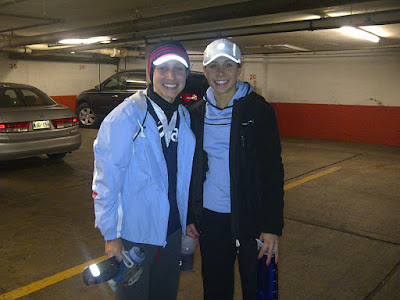 I decided to do the opposite of what everyone else was doing, something I like doing anyways. We parked in Rosslyn and walked to Iwo Jima. When I looked up at the number on our parking spot it said 26 – we were READY to run a MARATHON. I got excited.

On the walk to the start I remarked to Lauren that I thought this may be my last Marine Corps for awhile – I just didn’t enjoy the logistics.

Toward the end of our walk the sun rose over the Lincoln Memorial and the Washington Monument. I felt myself wanting to give Lauren a hug. Seriously I don’t care what anyone else says about the United States I think this country rocks.

YES we have PROBLEMS and LOTS of them. But I run FREE. I can run a marathon as a girl. I can run in the streets and not worry about being shot. I can teach my daughter that the sky is the freak*ng limit. I live in a country that is the home of the FREE and BRAVE.

The closer we got to the start the more I wanted to skip. The music was blasting – I was in my element. It was go time. [Just typing this makes me excited. I love marathons I love them more most things in this world].

I turned to Lauren and told her I was going to run Marine Corps again. Who am I kidding? The race has it’s problems – don’t they all – but I seriously love it. I love that it makes me excited to be an American. I love that people come flying out of the sky with a huge flag waving. I love being in the Nations Capital. I love reminiscing about my first marathon in 2003 and thinking about how far I have come physically, mentally, emotionally and more. 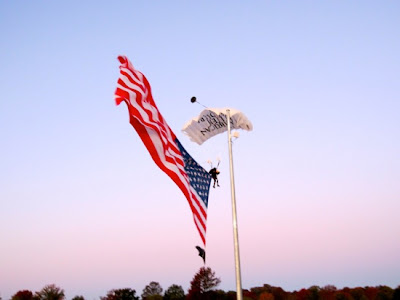 At the start line of Marine Corps I am ME. I don’t know how to explain it very well, but for a moment in time I am not someone’s mom, or someone’s wife or someone’s daughter. I am just ME. 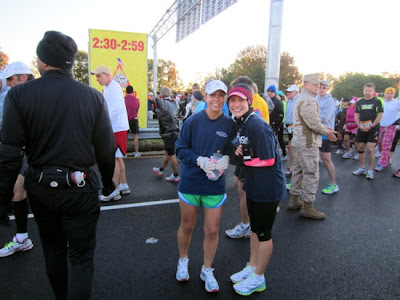 The cannon went off and Lauren and I were ready to go. In the first mile we chatted, which was fun and kept us under control. Start slow finish fast was our goal. 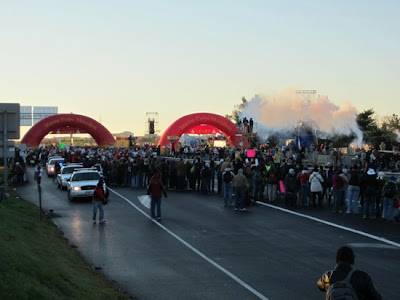 Lauren asked how my legs felt – I remarked fine even though they felt heavy. I needed to not voice out loud how they were feeling. I needed my mind to override my body today.

In mile 2 we started to pick it out with out even saying we would. This is when I knew we were a good running match for each other. We didn’t waste any energy weaving in and out. If we lost each other we knew we would end up right back next to each other.

As the miles pressed on and started to glide down hill Lauren started to pick up the pace. I told her I would catch up to her later. I saw her green and pink – #teamwatermelon – outfit speed along. I reminded myself to run my own race and to catch her on Key Bridge.

Key Bridge was icy – it felt strange to worry about my footing. I caught up to Lauren.

We ran side by side for most of the next miles. I loved being able to tell her when a big hill was coming – or how far away we were from Georgetown. It was fun feeling like I was an expert at something. I laughed in my head. Me an expert a marathons? Who would have thought when I was a smoker in college and overweight that I would one day be running my 18th marathon and giving advice to anyone about running.


We were almost out of Georgetown when we saw her boyfriend. I’ve never been more happy to see someone I don’t know than I was when I saw him. I tossed him some of my excess gear! 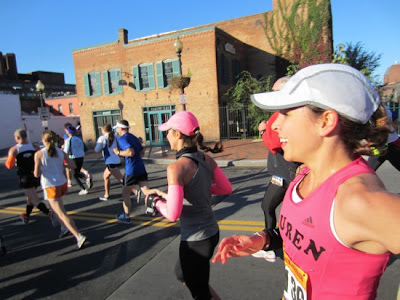 The miles passed by quickly. It truly amazes me how much harder a marathon feels when it takes longer than 4 hours. Don’t confuse what I am saying. A 3:13 marathon is HARD but mentally it’s over faster. I frequently run longer than 3:13 on a weekend – so to race a marathon faster than a 20 something long run – feels awesome. 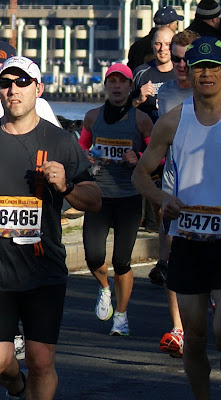 After we ran through Haines Point Lauren seemed to be hurting. I could tell her breathing seemed different somewhere around mile 16 she told me her legs were bothering her. I told her there were ups and downs – she would feel good again. Little did I know that the words I told her were the ones I would need most later in the race. 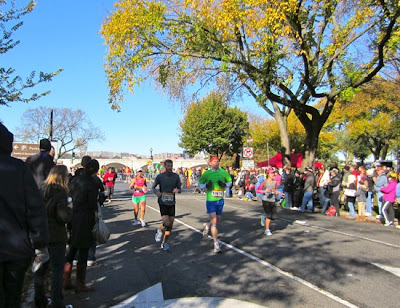 She never was far behind me. I could tell by the distance of the cheers where she was – I was glad she had put Lauren on her shirt. 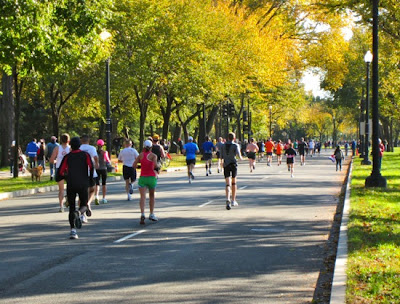 By mile 20 I was MISERABLE. I was feeling Columbus Marathon in my legs and my mind started to doubt. I knew I need to remain mentally strong, but it felt so hard knowing in the back of my head that I had PR’ed two weeks before. I gave myself an out. I realize now that in order to be strong at a second marathon I needed to forget the first one. I needed to tell myself I was running on fresh legs. What the mind believes the body can achieve, or not achieve.

Before I hit the MOST MISERABLE BRIDGE EVER [like literally I hate this bridge with every bone in my body] I saw the most amazing sight! My friends.

Hungry Mom and Miss Becca had come to help run in some of their friends to the finish of their first marathon. Karen [Hungry Mom] started to run with me. I told her I was ready for this SH*T to be over. She told me I had a long way to go. I needed to hear that. I needed to buck up. A marathon has ups and downs – I would feel good again – right?

After a mile with her – I wanted to cry. I knew the only reason I was running fast across this bridge was because of her pushing me. I wanted her to stay with me till the end. I told her I loved her. 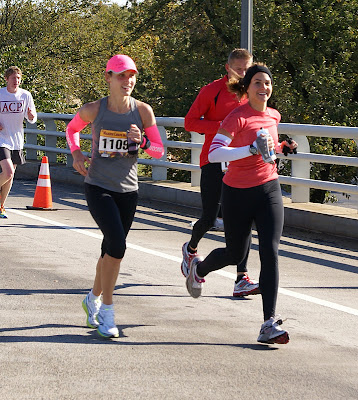 She reminded me why I was running. She told me I loved marathons. They were the perfect words. She stayed with me till I was across the bridge. I truly do love her.

This is what happens at the end of a marathon. If you aren’t strong mentally, if you go out too fast – anything and everything will bother you. You will find things to get mad about. Your mind wants you to stop. It will try to slow down your body – if that doesn’t work it will attack your mind. Suddenly random body parts will start to hurt. It’s your body. It doesn’t want you to run 26.2 miles. It’s the beauty and the anguish of a marathon. You have to run your body – you can not let it run you.

Crystal City seemed more terrible than usual. It is not my favorite part of the course, but usually the crowds get me through. They didn’t that day. I could no longer hear Go Lauren – I wondered where she was. I was still maintaining a decent pace, but I felt dead. I saw Jocelyn [Enthusiastic Runner] and couldn’t have been more happy! A wave and a smile made me feel better.

Suddenly out of no where I heard Lauren yell my name. She passed me.

I made the biggest mistake of the race in that moment. I yelled to her I was dying. From that point on I was defeated. I voiced out loud how I felt. My body believed it. My mind believed it. I watched as Lauren ran away. I wished I had tried to stick with her. I wished I had said Let’s Do This – something to motivate me.

From that point on I lost time and lost it fast. My mind told me it was okay if I tied my old PR of 3:21 – it was okay to run slower on the second marathon in 2 weeks. 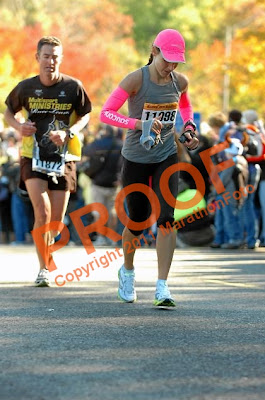 I sat down because I felt sick. A Marine asked me if this was my first marathon and did I need help. I smiled. 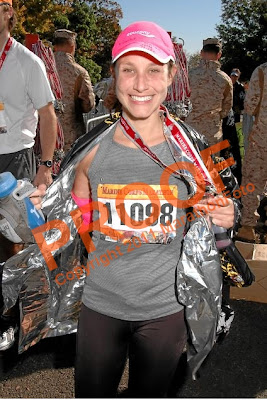 I found Lauren and she told me she pr’ed. My day was complete. It’s funny to say this but her pr’ing was the best part. She had been doubting her fitness and wasn’t SUPER excited for Marine Corps. If I in any way, shape or form aided in helping her get to the finish line faster than she ever had before, I was happy.

Some races aren’t about us. Some races are about other people. Spending the morning with Lauren and feeling truly loved by so many people was better than another marathon PR.