With Columbus Marathon less than 6 days away I’m going to talk about how you can avoid hitting the wall.

My two fastest marathons, 3:21:05 and 3:23:43 are the only two marathons I felt that I properly executed pacing, eating and hydrating during the race. It is no surprise that these are the two marathons out of 16 where I did not hit the wall. 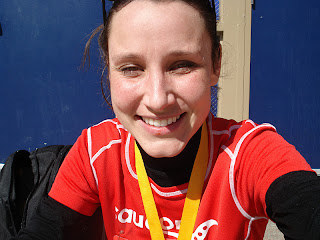 If you start out too fast in a marathon, even just the first mile, it is a mistake you can not recover from. You can not get your pace under control and expect the last miles of the race to feel good. Most likely you will feel like death, as if there are 50 lbs weights on each foot. You will wonder how it is possible to move so slowly when you felt so great the first 20 miles. The first 20 miles of a race are easy compared to the last 6.2.

Some of the best advice I have ever been given about racing the marathon is this:

The marathon is a 6.2 mile race that you run after you do a 20 mile warm up. If you go slow the first miles – you will be able to run fast the last miles. I’m going to use one of my long runs this cycle as an example of how this works.

The second and third worst mistakes you can make in a marathon, is not eating or drinking enough and not doing it soon enough. Starting to hydrate after mile 5 or eating after mile 8 just won’t cut it. When you start to feel like you need a gel/gu/blok it’s probably already too late. Drink before you are thirsty, eat before you need energy. Often people complain about a sloshing tummy from drinking too much – it’s not really that you drank too much it is that you didn’t do it soon enough. so your stomach starts to essentially shut down. Our body tries to protect us from ourselves. When it wants us to stop and slow down it will stop at nothing to try to make us do so.

When you eat during a marathon, always make sure you follow it with water. Your body can only digest the energy if taken with water. Don’t drink with it and your body literally pulls the water away from other areas of your body, and so begins the dehydration process. Even slight dehydration can have an effect on your race performance.

The trick in the marathon is to keep your body hydrated, fueled and happy so it keeps moving at the pace you want it to.

Coach George of Capital Area Runners is my go to guru for all things racing. When I was a 3:59 marathoner he believed I could be faster – MUCH faster. It came as no surprise to him when I ran a 3:36 only 6 months after having my 2nd baby. I listen to everything he says. Well almost. He thinks I run too many marathons, I agree with him, but don’t want to stop. I’m STUBBORN.

I’m reprinting some of his advice here with permission. If you want to learn more about his coaching services or group visit www.capitalarearunners.com

Manage Your Marathon!
Many marathoners fall into the trap of believing that hitting a wall late in their race is inevitable. That mistaken belief is what drives them to set out at a pace that they can’t possibly sustain for the entire marathon. The logic they use is that if crashing and burning near the end of the race is an inescapable fate, then they might as well put as much “time in the bank” as possible before they reach that point. However, if you manage your race properly, there is nothing inevitable about a late-race collapse.
Runners hit walls in marathons because they make mistakes. Those mistakes are usually some combination of pacing errors, combined with a bad hydration/nutrition plan. If you set out at an unreasonably fast pace early in your race and run yourself into oxygen debt, your body’s ability to efficiently metabolize glucose to produce energy for your muscles becomes severely compromised. Going out too fast will result in you running out of energy long before you would if you were to start at a more moderate pace. Even if you do pace yourself correctly, your body can only store enough glucose in the form of glycogen to get you through approximately 20 miles worth of running. Because of that, it is absolutely necessary to be eating during the course of a marathon to replace the glucose that your body is burning while running. Similarly, you’ll be sweating during your race and steadily depleting your body’s water stores, so it is important to be drinking fluids at every opportunity along the course. If dehydration begins to set in, your blood will thicken, making it more difficult to pump, which will compromise your body’s metabolic processes.
Any one of the above pacing, eating or drinking mistakes can result in the late stages of your marathon turning into a very painful experience. Combine 2 or more of those mistakes during your race, and things will turn extraordinarily ugly for you. But the good news is that you can control your late-race fate simply by paying attention to managing your race properly and avoiding making mistakes. Start slowly early in your race and focus on keeping “energy in the bank” as opposed to trying to put “time in the bank”. Pay attention to doing some carbo loading in the days leading up to your race, have yourself a good pre-race meal about 2-3 hours before the start, and make sure that you’re eating a gel or some other nutritional supplement every 40-45 minutes during your race. Stay well hydrated in the days leading up to your race and grab some fluids at every water stop, even if you’re not yet feeling thirsty. Runners who employ some clear-headed race management skills will always have a huge advantage over those who get caught up in the excitement of the moment and let their exuberance force them into race day mistakes.