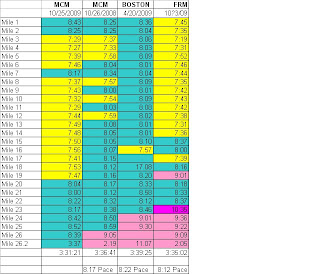 So the tricky thing about wearing a Garmin during a marathon is learning that you ran farther than 26.2 miles. According to the Garmin I ran 26.43 miles in 3:31:21(the exact number of my chip time) for an average pace of 7:59. And while I realize that it doesn’t matter what the Garmin says – since marathons are always a tad long in order to make sure they aren’t short – I’m left wondering if they are always this long?? I also wonder if any other Garmin wearing runners at MCM ran wayy longer than 26.2???? The fact that it was a little long makes me feel better about cursing at my husband about where the heck was the 26 miler marker?? (of course I feel that I can not be held accountable for anything that came out of my mouth during the last mile of a marathon – hehe)

I’m not the least upset by the news that I ran longer than 26.2 – I’m actually really happy because this means that I completely have the capability to run in the 7’s for future 26.2’s and technically according to Monsieur Garmin I already did 😉