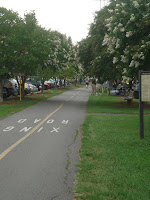 Last night I ran the Friends of the W&OD 10K race put on by race director Jay Jacob Wind.

With temps in the high 80’s and a sunny 6:30 pm start I didn’t have high expectations for myself. I was shocked to notice a decent amount of good runners at the start of the race and some familiar faces of people who I know have narrowly beat me in the past. I was really happy when I picked up my packet(of course I again forgot to pick up my race t-shirt) and found out that it was an electronically timed race. I’m much more comfortable *insert crazy OCDness* when a race is being electronically timed rather than based on when the gun goes off and adjusting based on finish times.
I really was worried that with 300 runners all being released onto the narrow trail at the same time that there would be a lot of congestion and eventually confusion. Much to my surprise this was probably one of the best run 10Ks I have run lately. I never felt boxed in! It was on one of my favorite sections of the W&OD and thanks to a small turn off into a neighborhood you never had to cross any streets. There was plenty of parking at the start. Saucony was there performing video gait analysis for everyone with their new ‘Sprinter Van’ that had made it’s debut at the Boston Marathon. Some of my friends even saw a guy propose to his girlfriend before the race – doesn’t get any better than that! 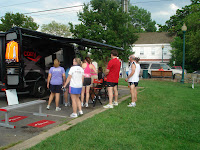 My only complaint is that I only saw the 1 mile marker and the 5 mile marker – so I know I started out at a 6:30 pace but beyond that had no idea whether I was running too slow or too fast in order to hit my goal time. All in all though I thought the race was great. There were great prizes (Free Saucony Shoes, Private Personal Yoga Session, Massages, Gift Certificates to Pacers Running Stores, Glory Days Grill Gift Certificates, Saucony String Bags and more!!) for the overall winners, age group winners, as well as for randomly chosen runners. I highly recommend this race.
As for me – I surprised myself. Another PR with a time of 43:22 and my fastest pace finish of any race distance with a 6:58 per mile average.