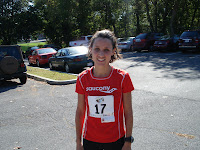 In order to tell a story is it best to begin at the beginning or end? For me I feel that I must talk about the end to really explain the beginning.

P.S. My husband is the best. If it were not for him I would not have pr’ed and probably would not have come in 3rd place. He met me around mile 25. I told him I was defeated and he said start running. Sometimes all you need is a swift kick in the pants to get going again. I told him I did not care about my time. He said yes you do – start running. I said I just wanted to get third. He said you will loose 3rd if you do not start running and start running fast. I came in 3rd because of him – I pr’ed because of him. I love him.