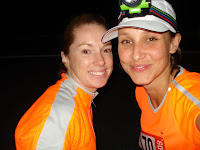 I’m back from Ragnar Relay and still on cloud nine. There is too much to write in one post so I am going to do a couple!!! Oooo la la I know you are excited!

🖤 a cool thing about saving your bibs & putting