I knew I wanted to run, but I also did not want to run. I was tired and honestly just did not even have the energy to find a sports bra and shorts. The thought of pushing the boys in the running stroller for a third straight day made me feel sick to my stomach. I wanted to run but not bad enough to push myself. I put on regular clothes and was about to walk downstairs when I remembered.

I remembered that I had just said that when I want to walk up a hill, I do not. I push myself on, to work my mental muscle. Was this a hill? Was I walking by not running? I turned around and found my favorite Saucony capri’s, put on a long sleeve and got re-dressed for the morning.

I went downstairs to make Chloe’s lunch and let out the dogs, before waking the three monkeys. UGHH you have got to be kidding me, I thought as I opened the door and saw it was raining. I just got dressed, and re-dressed for nothing? Annoyed, I left my running clothes on. I told myself that allot could change in the next hour and a half. Maybe it would stop raining long enough for me to run.

When we arrived at the parking lot for the trail, the rain had stopped, I said a little prayer inside that it would not rain for at least enough time for me to run 3 miles. 3 miles was better than no miles.

After a mile I considered turning around in case it rained, but something told me to keep running for another mile.

Somewhere during mile 3 a man passed me. He was not listening to music, but did not say hi. He was moving pretty fast so I excuses his unfriendliness and watched his running form. He was wearing a strap on his right leg and I am pretty sure the guy had IT band problems from the way he was supinating in his shoes. I wanted to run up to him and tell him that he should head to a specialty running store and get re-fit for shoes, but I did not…..[I frequently want to tell random runners this – but never do for fear they will think I am some crazy shoe obsessed girl – they may or may not be right]

On that mile I thought about how I love the term ‘getting chicked’ – when a girl passes a guy. [Sorry guys, it makes me feel strong.] I was going to chick this guy while he was running fast. I was going to do it while pushing two kids in a double running stroller.

Mile 4 I took off. It was about half a mile before I caught up to him. As I passed, I said good morning. He mustered up a hello…..my son Miles started chatting with me…I wanted to tell him that mommy was running fast and he would have to wait, but what 3 year old understands pace?

When I passed him I decided I was going to attempt to break my double stroller mile PR I set long before I got pregnant with Colton. 3/4 of the way through the mile, I knew I was in a bit of trouble. Why did I not remember that the last section of this mile was uphill. How could I forget? I have run this bit more times than I could ever count. I did not want all my hard running to go to waste, but even more I did not want said man behind me to think I had blasted past him only to start walking or to slow down. I know it is REALLY superficial that I cared in that moment what he thought, but I told myself whatever motivates you to get this mile done, is fine with me.

My lungs burned, my thighs screamed out. BEEEEEP. 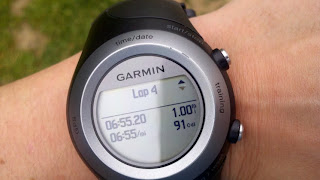 I looked down at Mr. Garmin and he said 6:55!! WHAT WHAT – take that tired. First double stroller in the 6’s EVER and a PR on a random Friday morning. Have I told you lately how much I L.O.V.E. running????

Need more motivation? Check out this article that I got in my inbox today from Women’s Health Magazine. Turns out maybe I do have a special talent —- it’s called GRIT.

🖤 a cool thing about saving your bibs & putting