i’m going to tell you a story. it’s going to be long, but i promise it’s worth it. it will have tangents but in the end it will all come together.

my given name was dorothy lesley. i am named after my great grandmother on my maternal side, dorothy lesley. she was born on 4/1 – she was the first dorothy in the family. i am the second dorothy and i was born on 4/11.
last week i decided it was finally time to get my haircut, it had been almost 11 months since my last one. yes i said 11 months, after chopping all of my hair off i began the process of growing it out. i called that afternoon and asked if i could be squeezed in that night. the hair dresser was a lovely lady and we hit it off right away. through our chats she asked me where my sense of peace came from and how had i overcome self confidence and self esteem issues. i’m not normally one that puts my faith out there for people. i respect people from all different religions and like to serve more as an example than someone who will openly talk all the time about my 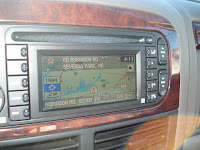 religion. i told her that alot of it came from running, then i went onto it being from getting older and being a student of life. she stopped me mid sentence and said – you know when you doubt yourself or have feelings of being ugly or not enough, those come from the dark one. your peace comes from God. it was so powerful. i said yes, yes you are right, it does come from God. i had a whole knew understanding of self defeating thoughts.
on saturday afternoon i was running late, i had planned to leave by 2 but didn’t end up getting out of the door till almost 3. when i arrived at severna park highschool the clock read 4:11. i knew it was going to be a good day. i went to pick up my number. dorothy beal please. the man said i hope you are not superstitious. i asked why. he said in a lamenting voice, your number is 13. i said well this is my 13th marathon so it’s perfect. i don’t believe in luck anymore.[more on that later] 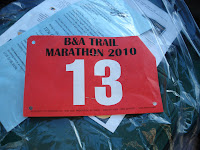 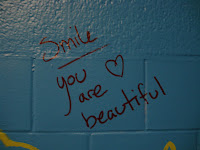 before leaving the expo i used the bathroom. this was on the wall. it made me smile. i had never heard of this *campaign* till my best friend michelle had posted it on her blog.
i booked my hotel on priceline. when i got to the hotel they had no record of me. after dealing with the manager for almost an hour i gave up and booked the room at the higher rate and just dealt with it. i wasn’t going to let the dark one get in my way today. i was comfortable in the room when i realized i had left my entire toiletry bag at home. no toothbrush, toothpaste, body glide, vaseline, hair brush, soap, lotion, sunscreen, lip balm, etc. again i was calm and was not going to let the dark one get me upset today. the front desk had a toothbrush and paste. good enough i thought. i walked up to my room and looked at my room number. it added up to 11. this race is going to be my race.
when packing my bag instead of bringing a novel or an us magazine, i decided to bring a christian book by beth moore. it’s not the type of book that you read from cover to cover. for some reason saturday night i was drawn to the section on unbelief. i paused momentarily before reading, to put the tv on for background noise and noticed that forest gump was just starting. claire had just done a posting on this movie. her posting made me smile because i too love forest gump. *there’s an awful lot you can tell about a person by their shoes. where they’re going. where they’ve been* i again felt that this was part of the plan, i was meant to hear *run forest run*
i texted my husband about my toothbrush – he told me the backyardigans was on and the episode was *racing day* i smiled and thought, man God really wants me to know he has a plan for me right now. i looked at the 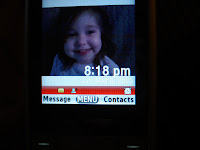 clock on my phone 8:18[my wedding day and a very special number between not only my husband and i but God and i]
i’m unsure why i choose the section on unbelief because i am a believer. this is the part that struck me. “you do have what it takes. you have Jesus – the Way, the Truth, and the Life. but you can’t just believe in him to be free from your stronghold. you must believe Him. believe He can do what He says He can do. believe you can do what he says you can do. believe He is who He says He is. and believe you are who He says you are.” i realized that doubting my fitness, doubting my capabilities as a runner was wrong. God has allowed me the time and energy to put in the training. he has helped me complete numerous long runs and pr at a tons of races. it was high time i believed not only in Him but Him. i was going to be the runner he told me i was.[during the race any time I felt weak i said to myself and to God – I believe you – i believe who you say i am – i am strong – i can do this]
it will come as no shock that i have been talking more about my spiritual life lately than in the past. i’m having a hard time not sharing the changes that are taking place in my life. since running has everything to do with the state of your mind and heart as it does to do with your physical being, i feel that it’s all interrelated and important to share on a *running blog*.
before the race i was in line in one of 3 bathrooms. i looked up and the woman standing in the door was number 411. it was going to be my day. i just knew it.
this race is run in the b & a trail. an old railroad trail, much like my beloved w&od. it is narrow and at best fits 2 – 3 people across. the half marathoners started at the exact same time in the exact same spot so i knew this race was going to be one that i had to run my own race and not try to keep up with others whom were most likely running less than me. at mile 4 i was in a large pack when WHAM out of no where an early half marathon starter slammed into my body knocking me back and nearly knocking me over. she had been running on the wrong side of the trail and had runners jumping every which way out of her path. all i can say is she must have been literally insane. two gentlemen that i was running with rushed to my aid to make sure i was okay and to assure me that the woman must have been off her rocker. i took this as the dark one taking one last shot to literally slam me down since the hotel mess up and the lack of toiletries had failed to break me.
if you get lonely, this is not the race for you. for me i’m used to be alone. only thing was that i never once felt alone. at mile 24 i literally thought i had gone the wrong way. i had not seen another runner, spectator or person for over a mile. instead of panicking i told myself i would stop my watch at 26.2 and that would be my marathon. i would not be broken. it seemed as if a voice spoke to me on that mile – it said *dorothy you are not alone, i am with you* a SMILE came over me. yes God you are with me. we will finish this together. i saw the mile marker for 25.
at around mile 16 the lead men started telling me i was the first female. no way? was i in first? i proceeded to ask about 12 different volunteers up until mile 24 and they all said there are some females ahead of you but you are in the top 5. along the route i thought to myself – Lord – wouldn’t it be amazing if i won. then my readers would really believe me, believe that what i speak is the truth. that all that happened to me was not coincidence, it was YOU talking to me. then i found myself retracting. Lord i am happy with whatever place i come in. i am happy to just finish with you on my side. i know these number signs are a way of you showing me you are with me at all times.
at mile 25 i felt a searing pain in my foot as i felt a blister rip open. ahhhhhhhh. i thought to myself this is nothing compared to the pain Christ endured for you. endure this and know that this is a small sacrifice to pay compared to his. today i did not let my body rule my mind. my mind controlled my body.

at mile almost 26 i started to hear people yelling out – what’s that girls number? well that’s wierd i thought to myself. i turned off the trail onto the street leading up to the highschool, i rounded the bend and was greeted with cheers as the crowd started to go wild. wow. why are they cheering? is this for me? is this how they greet all marathoners? their cheers made me ecstatic. i started running sub 7 pace. it wasn’t until 10 feet from the finish that i looked up and saw them unrolling a banner for me to cross. i burst into tears. i finished and bent over crying, 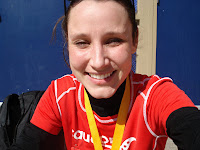 my body heaving up and down. a lovely woman said to me – you did it girl – you won – you really really did it. i stumbled to the side crying. the woman walked over to me again and said. you did it! i asked – did i really win? was i the first woman? she said yes yes – you won girl – you won – the other women in front of you were early starters[they started an hour ahead of me]. she hugged me. i forget her name now but she was the sweetest person. a stranger, a fleeting moment in my life, so precious and so wonderful. it was as if God through her was hugging me. i said to HIM- we did it – we really really did it. i can’t wait to proclaim your name.

and so there you have it, my race story. on the way home i was talking to my mom telling her the story i just shared with you, randomly i heard backyardigans *racing day* come on. i smiled. tonight i glanced at the clock 8:18. 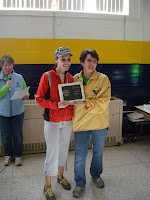