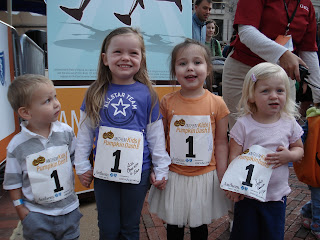 Saturday morning the alarm crowed.  Literally crowed.  The rooster on my phone seems more fitting these days to wake up to than a loud alarm bleeping.

The alarm meant it was finally time for Chloe and Miles to run the “kids race” they had been looking forward to.

I get giddy on race day.  Whether I’m running or not – just being at a race brings it on.  My husband calls it chirping.  My mood is happy.  I don’t stop talking.  Talking about everything and nothing all it once.

I felt giddy despite being a bit more stressed.  After all, it is much harder getting two kids out the door early on a Saturday morning for a race than it is getting just myself ready.

That morning I felt I was giving my children a gift.  My first race was in 2000 at the age of 18.  Chloe’s first race was 10 years later at the age of 4.  I’m giving my children the gift of a head start on being healthy and athletic.  They may never be runners.  They might not even like sports. I am giving them a no-pressure option of learning early so they can decide for themselves.

Chloe is convinced that her and her best friend Ava won the race.  In a sense they did.  They won their own race.  They ran their little hearts out for 100 meters and finished proud and confident.  That is what winning is all about.  Not being the best, but being their best.

In reality they really were among the first girls to cross the line.  My competitive nature made sure that Meredith[MR PIC] and I were at the very front of the starting line with Ava, Chloe, Miles and Sophie.  We didn’t want any strollers, parents or kids who were out for a jog getting in our way.  They wanted to race and we wanted them to.

Miles and Sophie are also convinced they won the kids 2’s division.  Miles the boys and Sophie the girls.  There can be so many winners on race day.  Male, Female, Age Groups, First Time Racers, PR’s —  The list goes on.

Next time you race, think of these four children.  They won.  We didn’t lie to them.  They won.  For winning is not always about crossing the line first but about your attitude about your performance.

When I need a race attitude adjustment or just a reminder of what winning is really about – I think back to Marine Corps 2008 when I qualified for Boston for the first time with a 24 minute marathon PR.  On the way home I turned and said to my husband “I feel like a champion”  — I did and do to this day feel like a champion, even if I am just a champion in my own mind.