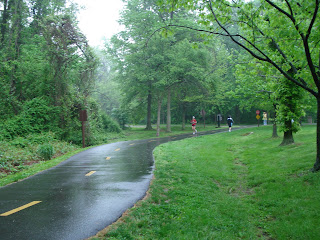 I just found out that there will be a Potomac River Run Marathon this year!

There was some debate on whether it would happen this year after last years fiasco[more on that in a moment]. It seems the race has been moved to the C&O Canal and is up and running so to say. So now I have a dilemma. I want to run it. It’s in May, which means I would have over a month for a re-taper – as I like to call it. It would also mean that my legs would not be as dead as they were last year when I ran this race two weeks after Boston, qualifying me for Marathon Maniacs.

I totally[insert 80’s half-side-pony hair flip] recommend this race if you like a hometown feel to a marathon[only 300 runners]. I’ve run on the C&O canal countless times and while I can’t say I think this course will be super fast – I can tell you that it will be gorgeous.

The short version of the fiasco last year, was that the park service revoked the permit mid race. What this means is when I came running to the finish of the marathon – there was nothing there – no finish line, to timing mat, nothing. I wasn’t even sure when to stop my watch. Obviously the *people* that run the park service have never run a marathon before or they would have understood that they were not punishing the race director but those of us who trained hard and long for that day. It was not my target race, so I can tell you I was calm and even sort of had a laugh about how random it was to finish a marathon and not even know where the finish was.

I don’t mind being alone during a race, I don’t have to have people cheering for me. I am fine with being alone with my thoughts for hours. I’m used to it. This was a perfect race for me. *sidenote* it poured the entire race. I love the rain. Love it so much that my daughters middle name is RAINE.

The post race celebration was moved to a nearby gas station and gift certificates were handed out to all finishers. $25 to Georgetown Running.[Which I gladly used to buy Bart Yasso’s book] I also got a neat running painting, a medal, and some yummy post race food. 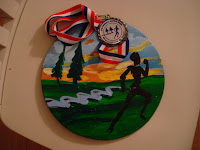 Those who qualified for Boston were upset that their times might not count, however I saw listed on the facebook fan page that the race director, Jay Wind, met with the Boston Marathon and the times will count. So all in all – I think what could have been a disastrous race turned out to be pretty cool!

What to do, what to do, put some mustard in your shoe….to run or not to run?